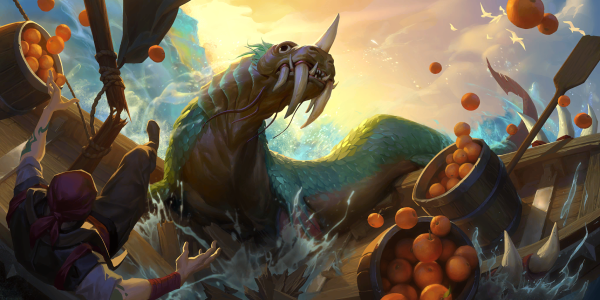 Hey there, Raphterra here! Today, I’m bringing to you a guide on Solo Nautilus Deep.

Deep is an old archetype that might be finally back to high-tier status, as I used the list featured in this article to climb from Platinum to Diamond at 70% win rate (33 Wins – 14 Losses).

It’s still too early in the expansion to make conclusions on the true power level of Deep, but the deck feels very promising to play with it’s new support cards. If you want to see the deck in action after reading this article, check out my detailed video guide!

Deep is a midrange combo deck that’s built to enable the Deep keyword and dominate the mid-late game with Nautilus and his sea monsters.

In order to go Deep as soon as possible, the deck uses Toss cards like Dreg Dredgers, Sea Scarab, Deadbloom Wanderer, and Jettison. Once Deep, the deck wins by going wide with Level 2 Nautilus and discounted sea monsters.

Prior to this expansion, Deep had a horrendous matchup against aggressive decks unless it’s hard teched with several heal cards like Withering Wail. However, teching Deep with too much healing reduces it’s consistency against midrange and control Decks.

The Worldwalker expansion brings two new cards that help Deep solve this problem: Megatusk and Undergrowth. Megatusk is a new sea monster that heals your Nexus and allies at burst speed once you’re Deep. Undergrowth is a control drain spell that also progresses the Deep win condition with its Toss effect.

These cards give Deep a better matchup against most aggressive and burn decks without compromising the deck’s consistency against other deck types.

You might notice that the list I used does not run Maokai. Despite Maokai being a great Toss engine, his 1/4 statline is just too much of a tempo loss. Level 2 Maokai also only matters against a handful of control matchups; against aggro and midrange, Maokai is a big liability. There are many other Toss cards available in the card pool, so Megatusk is just a better card to take Maokai’s slot.

To close off the build, my deck list runs Lure of the Depths and Jaull Hunters for sea monster generation, as well as Vengeance for hard removal.

Vile Feast and Undergrowth are great for healing against aggro decks.

Lure of the Depths will be impactful if played early against slower midrange / control decks.

Against other specific deck matchups, you can keep Vengeance if you already have a good hand.

Games with Deep are straightforward, and usually go in the following pattern:

Mulligan for: Dreg Dredgers, Sea Scarab, Deadbloom Wanderer, Lure of the Depths, Undergrowth. If you have a good hand: Vengeance

Mulligan for: Dreg Dredgers, Sea Scarab, Deadbloom Wanderer, Lure of the Depths, Jaull Hunters. If you have a good hand: Vengeance

Mulligan for: Dreg Dredgers, Sea Scarab, Deadbloom Wanderer, Lure of the Depths. If you have a good hand: Vengeance

For quite some time, Deep has been sleeping in the lower tiers of the meta. It’s really nice to see Riot releasing new support cards to revamp old archetypes. Time will tell if Deep can make it to the higher tiers once the meta settles.