Miss Fortune and Quinn is a duo that never gets old. Sometimes, Scouts disappears for a bit, as counters to the deck make it difficult to play due to the deck being rather inflexible in its core mechanics.

For the whole period where Pantheon was a great deck, for example, it was difficult to play Scouts as this matchup was impossible to edge. The same could be said about the Ezreal Caitlyn matchup, or more recently, the various Bard Demacia decks.

With the arrival of Worldwalker Patch 3.10.0, Pantheon got hit pretty hard, which was already a factor in favor of Scouts returning. Then Azirelia made a comeback, which once again strengthened the idea that Miss Fortune and Quinn could be in for Tier 1 contention. Finally, because Demacia was nerfed and Azirelia was now a popular deck, we also have seen some aggressive strategies be on the rise like Annie Jhin or the returned Ephemeral synergy. All of this has lead Scouts to be a discreet, yet powerful contender since the patch, sporting just 0.57% play rate but reporting a 55% win rate!

Things will likely keep evolving until the next seasonal tournament, as players should start grinding for a finish as they look to solidify their position on the ladder. Therefore, today I would like to present to you the latest iteration of one of those decks players could turn to for their grind: Scouts. 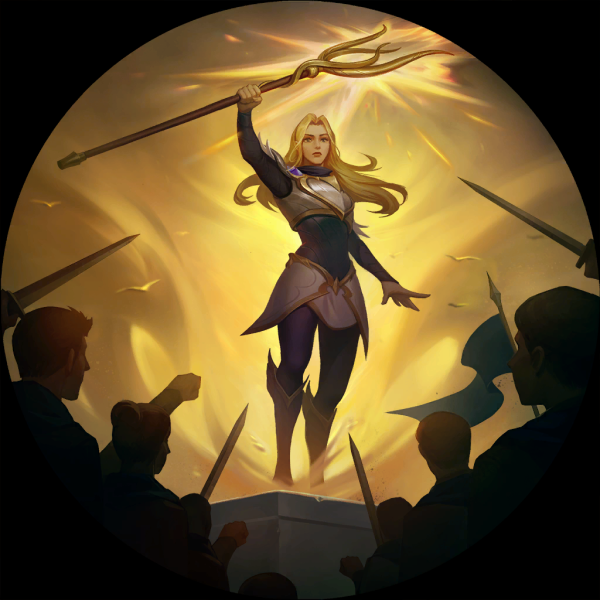 The decklist was largely inspired by Broken Ball:

Scouts is a deck that combines both traits of a great ladder deck. It is a fast, proactive archetype, which you can play against a large variety of opponents similarly. Also, the deck has been popular for so long now that most players can go back to the archetype whenever they feel it is well positioned in the metagame without needing to learn its play patterns.

Speaking of play patterns, Scouts is taking a different form in the current patch, relying much more on its global effects rather than protecting key units. With the addition of Inspiring Light to the list, the deck is going back to its roots, when it was played as an Allegiance build with Vanguard Bannerman. In the previous lists, Miss Fortune was everything to the deck, and we would always keep a spell in order to protect her from a potential removal. The deck now looks to buff all the units at the same time, creating a beefy army we can attack with, and resistant to AoE removal.

With this new way of progressing on the board, Scouts are also less reliant on dominating early in the game, preferring to adopt a midrange kind of gameplay. Even if we don’t get any damage to the opposing nexus early on, a couple of buffs onto 4 or 5 units can immediately threaten lethal in the coming turn.

Also, this kind of gameplay is helping our situational cards like Golden Aegis, which could often be dead in our hand if our board was cleared. With this slower approach, relying on buffing our units rather than pressuring the opponent continuously, our board is more resilient and much more likely to be usable for a effect.

As a testimony to this new direction for the deck, Zap Sprayfin has become a nice inclusion in the deck, providing a bit of draw while being able to push damage if buffed, thanks to its Elusive Keyword.

A good 2 drop in the idea of swarming the board to receive our buffs, I found Marai Warden to be a bit disappointing overall. There are two reasons for this feeling:

Cithria the Bold and Yordle Ranger

The battle between Cithria the Bold, Genevieve Elmheart and Yordle Ranger for the most optimal slot in the deck is never agreed on.

In this iteration of the deck, Genevieve gets the nod because of her buffing ability, which fits the deck’s theme a bit better and reinforces even more the beefy aspect we are trying to build our board around.

Cithria would fit better in a build maximizing the attack turns, or in a metagame with more decks weak to the fearsome keyword. As for the Yordle Ranger, the card shines against control strategies as it buffs our board continuously while Genevieve is better on the spot, which seems to be better so far.

This card is the most controversial omission from this list, as I preferred going with Ranger’s Resolve and a copy of Shield of Durand.

Sharpsight is a completely valid card in the deck, and I wouldn’t fault anyone for playing it. The reason I decided not to include it is to include more global or long-lasting options. Ranger’s Resolve allows us to protect our full board and Shield of Durand‘s buff is a permanent one. Once again, it is more a goal of being consistent with the direction of this iteration of Scouts.

Prioritize the board over damage

Although it is tempting to get a ton of damage in early on, Scouts is a board oriented deck, not a damaged based one. Thanks to our buffs, Rally effects and Scouts keywords, the damage potential of the deck is huge, and dealing double-digit damage in a turn is quite common if we are ahead on board.

As such, with the reduction of other Demacia based decks on the ladder right now, we don’t need to be as aggressive as we had to in the past, against Pantheon for example.

Obviously, we would like to use our buffs to improve our offensive abilities and transform those additional points of attack in order to beat our opponent faster.

However in reality, the real power of Inspiring Light is making our board much more resilient, difficult to remove as our units will require more resources to deal with. Playing it in order to keep our units alive will give us much bigger board to abuse Genevieve Elmheart or For Demacia! later on.

For example, Miss Fortune going from a 3|3 unit to a 4|4 keeps her safe from all the 3 damage removal in the game, like Get Excited!, Aftershock or a potential Noxian Fervor.

Force your opponent to play onto the board

With Miss Fortune‘s passive ability, Barriers, the Scouts keyword and the Rally effects, we are much better off with both players developing a board than a clean table.

As such, we want to make the match about who can win on the board, rather than letting our opponent play their spell based synergies and focusing on answering our development. Especially against Noxus or Shadows Isles based decks, who usually has a good amount of removal spells in their decks, we need to create a situation where those aren’t effective.

This way of playing the game prevents the awful outcome of our hand slowly emptying itself of units and having a ton of spells without any targets for them. If both players are playing onto the board, it gives us more room to develop, and then we will be able to use our spells to play round the opponent’s ones.

Inspiring Light on a large board can win the game, the same way Golden Aegis would once we are ahead on the board. Yet, because those spells are Slow, they come with a bit of a downside:

Our deck is obviously much better at building a wide board and abusing our global buffs afterwards. Our main goal in almost every match will be to overwhelm our opponent on the board and present more problems than they can handle. However, there are times where going all in on one unit might be more beneficial.

Zap Sprayfin for example, can be worth investing into if the opponent is particularly weak to the Elusive keyword, or if we saw a lot of removal be used, and we think we can level up Quinn. As such, we can use Inspiring Light or even a For Demacia! if we know we are guaranteed the damage and looking to push to end the game.

As a rule of thumb, I would always start a game with the intent to go wide and cash in the best Inspiring Light possible. As the game progresses, it still might be good to keep an open mind on what will be the hardest thing for the opponent to answer when we switch from developing to focusing on damage.

Mulligan for: Miss Fortune – Durand Sculptor – Inspiring Light. Look to swarm the board early on.

With most popular decks representing good matchups, Scouts is looking to be well positioned in today’s metagame.

Most decks are looking to develop midgame based synergies, and open the door to early development to be quite effective. Thanks to be one of the best trading best in the game in the first 3 turns, Scouts can also compete with the other fast decks like Azirelia or Annie Jhin.

I’m still quite unsure why Scouts plays a minor role in the current metagame considering its positive matchup table. My guess would be that Bard still is a problem for the deck and with the champion pushing several archetypes, it is discouraging a lot of players to pick Scouts as their primary ladder deck.

The fight amongst the top decks isn’t over, and which of the current popular builds ends up most popular will heavily impact how good the Scouts deck will be down the line as well.

As usual, I hope this guide was helpful to some of you out there, feel free to drop any question in the comment section. Otherwise, find me in our community discord or on my Twitter page. 😊