The Winners and Losers of Patch 3.0

Patch 3.0 is almost upon us – with 28 changes, we have here a very large balance update that should meaningfully impact the current meta.

In this article, I would like to analyze how the environment is likely going to evolve. First, we’ll go over the decks that have suffered from the changes in the patch, and then we’ll cover the ‘winners’ of the patch. If you are interested to learn more about the upcoming update, feel free to check out my Patch 3.0 review article.

I hope this article will help you figure out where the meta is heading and what decks you want to play in the new patch. Now let’s get into it!

The archetype, built by Drisoth, has been one of the biggest newcomers of the current season, jumping to the Tier 1 status in the blink of an eye. The deck was showing pretty average results on the ladder lately because of its complex playstyle, but with a 54% win rate in Master, it was clearly deserving of its title when it comes to high-level competition.

In the recent patch, Nami TF is the only popular deck to get hit by 3 nerfs, and all are very impactful. Curious Shellfolk going from 6 health to 4 will make it a lot easier for the opponent to kill it – or run over it. Most versions were playing some number of copies of Monster Harpoon, which also got hit pretty hard.

But out of the three nerfs, Hidden Pathways is the one that is the most painful. It is now the worst draw spell of its class, and not only this will be slow down this deck’s value, but it will also make it harder to threaten Twisted Fate‘s level-up.

While those nerfs are quite impactful, I expect this deck to still be playable in experts’ hands, especially as a way to target Ahri Kennen. That said, I expect it to drop a whole tier, and, on the ladder overall, I expect it to lose a lot of its popularity as it will be even harder to play than before.

The nerf to Monster Harpoon hurts the card a lot, making it way worse as a reactive spell and a tempo play. With this change, Ganplank Sejuani should start to struggle to interact with the opponent, and in most matchups, this is not a deck that can afford to simply ignore the opponent’s game plan.

With this nerf, I expect Gangplank Sejuani to settle down on a Tier 2 status. The buffs to control decks this patch won’t help the deck either, as it has generally a hard time against those archetypes.

Pantheon Fated is the untouched Tier 1 archetype, therefore an easy conclusion would be to think it is somewhat a ‘winner’ out of this patch. While I do expect the archetype will still remain in Tier 1, I’m going to actually list it here, among the ‘losers’.

First of all, Pantheon isn’t happy to see Nami TF going down as he had a 62.4% win rate against it. It was Pantheon’s best popular matchup, and seeing it go away will without a doubt hurt the deck’s overall success rate.

Even worse than Nami TF going down will be the ripple effects of it. Nami TF was pretty much the only non-aggro popular archetype to prey on Kennen Ahri, which Pantheon Fated really struggles against with a 37.1% win rate.

Depending on how dominant Kennen Ahri becomes after it gets freed from the Nami TF matchup, hyper-aggressive decks could also rise up to prevent that deck from becoming an apex predator. Those same hyper-aggressive decks, such as Elise Burn, are also difficult matchups for Pantheon (40.9% win rate).

Just to add up on all that, Gangplank Sejuani was also a good matchup (57.7% win rate) and should be less popular after the patch, and the buff to Vengeance will make stacking buffs on a single unit very punishing.

As stated earlier, I still do think Pantheon will keep its spot in Tier 1 because of its high power level, but I do expect it to lose a bit of its high win rate.

While Gangplank Sejuani should be able to recover just fine as a good Tier 2 archetype, Gangplank TF is likely going to be left dead in the water. It did not only see Monster Harpoon getting nerfed, but will also suffer a lot from the big nerfs to Hidden Pathways and Lecturing Yordle. The archetype was already fading away lately, and with this patch I expect it to fall into obscurity.

Draven Sion is another archetype that got thrown under the bus, and quite awkwardly. Lately, the deck has already been at its lowest point since its release, losing its player base to the more explosive Rumble version of the discard archetype. Sion getting slapped in the face with a big nerf means everyone will turn towards Rumble for good. 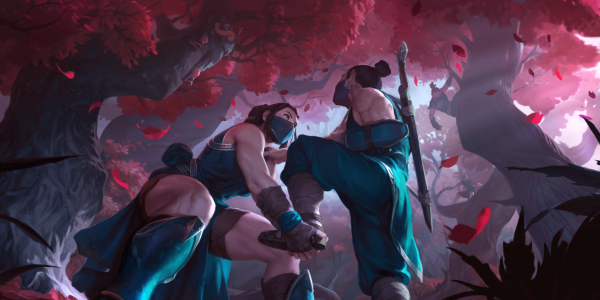 Seeing Ahri Kennen among the ‘winners’ of the patch is quite scary when you know the deck already has a 60% win rate in Masters right now.

Ahri Kennen’s only popular non-aggressive counter was Nami TF (43.8% win rate against it) and with it getting nerfed pretty hard, the road is looking clear for Ahri Kennen to start dominating even harder than before.

Even the next deck in line that claims to have a positive matchup against it (excluding hyper-aggressive decks), Gangplank TF (30% win rate against it), got hit very hard as collateral damage in the patch. At this point, it looks like one of your best bets if you’re looking to beat Ahri Kennen, will be to play the Go Hard version of Ahri Kennen, which prevails in the mirrors with a 60% win rate against the popular Shuriman version featured above.

All that said, there are still other ways to try and attack Ahri Kennen – the deck shows a 34.4% win rate against Spider Burn, and Nightfall is another interesting counter (35.7% win rate against it) that could gain traction from Diana‘s buff this patch.

More options could also emerge out of the patch, such as FTR Control, and I am not expecting Ahri Kennen to become an apex predator just yet, but it will likely be an even more meta-defining deck than it was before.

This patch seems to be really pushing the Shadow Isle Freljord control archetypes. With impactful buffs to Anivia, Trundle, Vengeance, and It That Stares, this patch is making a lot of room for this playstyle as a whole, and we can expect decks such as Anivia Control and FTR control to see a bump in play rate and win rate.

The most impactful of these changes is without a doubt Vengeance going from 7 to 6 mana. Not only this change will affect every build of FR SI control, but it also makes the playstyle much smoother – holding such an expensive spell to react to the opponent’s play was often too uncomfortable, making the card easier to play around.

Overall, a meta dominated by Ahri Kennen seems to be an interesting environment for Shadow Isles Frejlord control to thrive in, and maybe it will be the archetype that pushes the meta to more diversity.

While Kindred can definitely become one of the ‘winners’, I have no solid data about their previous performances, and therefore quantifying their future impact on the meta is very hard. Sentinel Control (build inspired by 4LW) is looking to be one of the most promising builds for her and I would not be surprised to see it make it into high tiers, but wilder builds such as Viego Kindred could also surprise us and will for sure see a lot of experimentation.

Just like Kindred, Iceborn Legacy is another card that could push archetypes in the meta. How strong decks playing around this card will be is even more of a wild guess than in the case of Kindred. There are several ways to build around the card, the best-looking ones feature Spiderlings and Daring Poros, and we’ll see how high in the tiers those can go.

Lastly, I wanted to mention the Sun Disc archetype, which has received several impactful buffs. I still don’t expect it to be truly competitive, but it is pleasant to see it getting some help from the patch to close the gap a little bit.

With so many changes, and a lot of them being targeted at cards that haven’t seen play for a long time, it’s a bit hard to predict what exactly the meta will look like.

It is an easy assumption to make that Ahri Kennen will be a meta-defining deck, but maybe with the upcoming rise of the control archetypes, there will be a bit more to what awaits us.

If you have any questions, feedback, or want to discuss those balance changes, I’ll be happy to read and answer you in the comments below!