Hi everyone, den here with another deckbuilding showcase!

This third episode of our Deck Doctor series will feature a different approach to Pantheon, a champion that has made strides since the hotfix. Pantheon’s synergy with Demacia, whether it is in the solo build or alongside Taric, has helped the champion rise in prominence, and both versions are fairly popular across all ranks.

In today’s article, we will explore drboleta‘s idea to mix Pantheon with Bilgewater, most specifically Twisted Fate. The concept feels very interesting, as Bilgewater isn’t a region I would associate with combat, but rather with Plunder mechanic and being overall a great support region.

In drboleta’s deck, Bilgewater serves that latter role and is sprinkled in to help with the overall synergy and to bring more draw power than the Demacia builds would have access to. 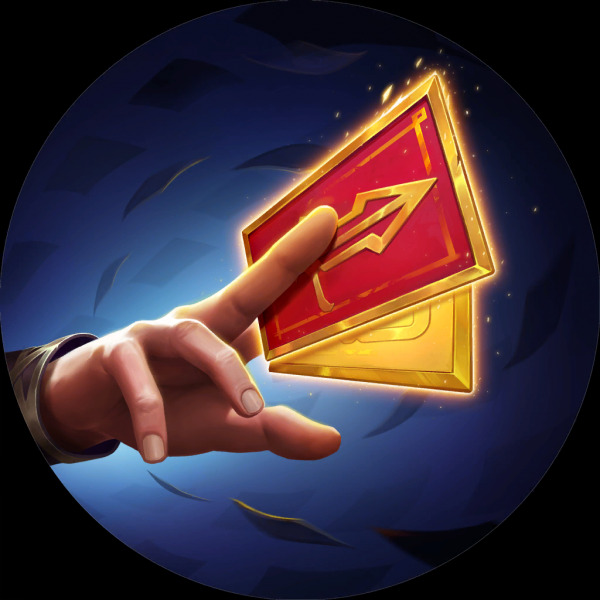 Here’s how drboleta has described his initial idea:

“I was trying a way to fit TF alongside the Fated package when I realized that Fortune Croaker was the piece of the puzzle I needed. So, I used an old TF Aphelios shell to build my deck, which can go for the Pantheon wincon or the TF wincon.

“On the mulligan, I always go for early Fated units and TF if he’s absolutely necessary on turn 4. Never keep Pantheon. Gameplay always goes for pumping the Fated units and/or protecting TF, depending on how the game goes. Spacey Sketcher is the “fix bad hands” tool.”

From this, we have a fairly complete idea of how they envisioned the deck. Twisted Fate brings a secondary win condition to the build, and together with the Fortune Croaker and Pocket Aces, there’s a good enough package to make Bilgewater relevant and useful for our Fated units.

The rest of the deck is comprised of the standard Targon core we can see in most Pantheon decks, but also adds some supporting tools in the form of the Spacey Sketcher.

At first glance, the deck looks like it makes sense in principle, but I’m wondering about its power level. Demacia has been the best region to pair Pantheon with, not only because of the combat spells and tricks, but also because thanks to Cataclysm and Golden Aegis.

Demacia provides us with opportunities to close the game – and being able to threaten the opponent even during your non-attack turns is a very important part of unit-centric decks. Now let’s take drboleta’s original brew for a spin.

When working with drboleta’s deck, I felt like it was very easy to understand the direction of it, and this is something I value a lot in deckbuilding. Most cards were 3x, the synergies were clear, and with the explanation, even the peculiar inclusions, had the reasonings behind them. I have to say the doctor was very happy with his patient this time.

However, I felt like the deckbuilder went with too many draw and support cards, like Hush or the Spacey Sketcher. And that would be my biggest criticism of this build.

While trying to support the deck with more draw isn’t a bad idea, taking away most of the tools that make the synergy explosive feels like it might lead to us struggling to close out games.

Good middle ground would be to find some support to the synergy while not reducing the tempo it can create. Investing mana into drawing cards for the sake of drawing cards doesn’t help our main gameplan.

So, while the direction drboleta explores is interesting, it is important to keep the nature of the Pantheon deck intact – otherwise, we simply are shifting the focus of our deck instead of enhancing it.

Initially, I tried to keep Twisted Fate as the second champion because this was at the core of drboleta’s idea, but in the end, TF didn’t look like he was providing any specific boons to the deck – outside of simply being a flexible card.

Looking for another synergistic champion that would also be able to keep the draw going, I ended up siding with Soraka over other options (I believe Zoe or Fizz could have been great too).

Soraka also works really well with another core Bilgewater mechanic – giving Vulnerable to opposing units. Shakedown is especially nice to synergize both the Fated units and Soraka’s synergy. Fortune Croaker, which was a core part of the original build, is another natural enabler for Soraka.

We don’t need to maximize the healing synergy – Soraka is not a win condition, but rather a complementary draw engine. The only card from her usual package I brought to the deck is Star Shepherd. This unit is a good blocker early against the prevalent 2-attack 1-drops in the game, giving Soraka something to heal later on, and if it happens to grow enough, we can grant it Overwhelm with a Zenith Blade.

A card I tried instead of Star Shepherd for a bit was the Hired Gun, acting as another vulnerable keyword enabler. While the unit has its merits, I found the Star Shepherd to be more of a presence, as it usually grows to a point that the opponent cannot ignore it anymore.

Earlier in this article, I mentioned that Demacia feels more natural alongside Pantheon, the main reason being that the region provides spells that help close the game even during non-attack turns. Well, it turns out Bilgewater also has that kind of tools in its arsenal.

At first, I thought about Playful Trickster, but the deck does not develop enough units in order to afford to remove one from combat. The List, on the other hand, is an interesting card that acts very similarly to Cataclysm, a key finisher in Mono Pantheon builds.

With Shakedown being a great spell in the deck now that Soraka is the second champion, The List can occasionally provide that surprise attack that could close the game.

Working with a champion that already has a clear frontrunner deck in the metagame isn’t easy. Subconsciously, you do always compare what you are doing to that already existing powerful deck and can’t help but think – your build will likely be never good enough.

In the case of Pantheon Bilgewater, I felt like the deck was lacking the interactive aspect that the Fated mechanic needs so much in order to stay up to par with their opponent’s tempo.

While Twisted Fate inclusion isn’t a bad idea, as the champion’s versatility can help in a lot of situations, the 4 mana you have to invest usually prevents you from doing much else during the turn. Even though Twisted Fate does well, we are sacrificing the needs of advancing our primary gameplan.

Soraka feels better in that regard, as she helps with the draw while still providing immediate tempo through her healing.

In the end, after the dozen of games I played with both decks, I don’t feel this Pantheon version has a chance to become a Tier 1 deck, and I would believe the Demacian variants to be better overall.

However, that doesn’t mean Pantheon with Bilgewater has no reason to exist. First, I believe the Fortune Croaker idea is absolutely great from drboleta, and Shakedown together with The List is a very neat gimmick we can exploit.

Second, the deck feels better than Demacia against Noxus-based decks, especially against Ravenous Flock and Scorched Earth that are being played in most decks using the region.

As usual, I want to thank everyone for their submissions and discussions in the #deck-doctor channel on our Discord. More episodes of this series are coming so keep the ideas flowing and join us if you haven’t already!

If you want to share your creations or your results with Pantheon Bilgewater, feel free to tag me on Twitter.