Monday is finally here and that means it’s time for my Power Rankings! If you’re new here, I’ll basically rank up 8 decks that I believe are currently the best choice for a ladder climb, the rankings rely on my personal experience and knowledge of the ladder along with using a bit of data here and there.

With the release of patch 3.6, the meta was shaken up as many underperforming champions received the buffs they long awaited for. The most important change was the play/cast game rule which was an indirect buff to champions like Ezreal, Lux, and Heimerdinger increasing the play rate of all three of those champions.

Alright, let’s take a look at this week’s top 8 best decks for your ladder climb, without further ado, here we go!

2
Faces of the Old Ones

Trundle Tryndamere is the king of the meta, although the archetype didn’t receive any buffs to its cards, the meta around it evolved to favor the Shadow Isles Freljord deck.

With the slight nerf to Mono Shurima, now it takes them longer to fulfill the Sun Disk’s condition granting you additional time to set up your win condition before they take over the game with their ascended champions.

Trundle Tryndamere performs well into Caitlyn Ezreal, which is currently the most played deck in the meta, and Draven Sion, the rising star after the recent buff to Sion.

Miss Fortune Gangplank still seems to be roaming the ladder, which is the perfect prey for Trundle Trynamere to target. The healing along with AOE Damage spells make it difficult for your opponent to commit a wide board of units.

However, the archetype mostly struggles against landmark decks like Taliyah Ziggs and Taliyah Malphite due to their stun cards and ability to set up a strong attack with their champions. Yuumi Pantheon is another deck you struggle a bit into, if you’re unable to deal with the Fated units you’ll find yourself getting beat down once they get the overwhelm keyword.

Jayce Lux is the runner-up for this week’s power rankings, the new play/cast rule turned Lux into a more solid champion! Now gaining value immediately once you play a Fast or Slow speed spell as opposed to pre-patch where you’d have to wait until the spell is resolved to generate a Final Spark.

Although the new play/cast rule benefits Lux in that aspect, it does weaken Lux in another. If you have a leveled-up Jayce on the board and you copy a 6+ mana spell, you’ll now only generate one Final Spark while pre-patch you’d be able to generate two. But according to Legends of Runeterra Game Designer RubinZoo, this change will be fixed later on which will allow Lux to create two Final Sparks again, making the deck even stronger.

Nevertheless, it seems the positives outweigh the negatives here, the ability to create Final Sparks immediately seems to have much more impact early on in the game, allowing Jayce Lux to dominate mid-game until they set up their final win condition.

The Demacia PnZ deck beats down decks like Caitlyn Ezreal, Ezreal Heimerdinger, Scouts, and Viego Nasus. It has an even or slightly favored matchup into most of the other decks but falls behind against Mono Shurima, Trundle Tryndamere, and Yuumi Pantheon as it struggles to kill high stat units.

Draven Sion is back to the top 8 power rankings! The aggressive Noxus PnZ deck received a buff to its toughest unit – Sion. The champion was hit with a nerf that dropped the play rate of the deck and even swapped him out with Rumble, but now after his recent buffs, he’s being given a second chance, and boy the deck is performing!

Due to the early aggression the deck imposes along with a Sion finisher and a burn plan, it is performing well against popular matchups like Mono Shurima, Ezreal Caitlyn, Yuumi Pantheon, and Ziggs Taliyah.

What’s neat about the deck is that you don’t really auto lose a matchup, you’re able to sneak a win even against unfavored matchups like Trundle Tryndamere with the help of Survival Skills, Sion, and the burn cards like Get Excited! and Decimate. 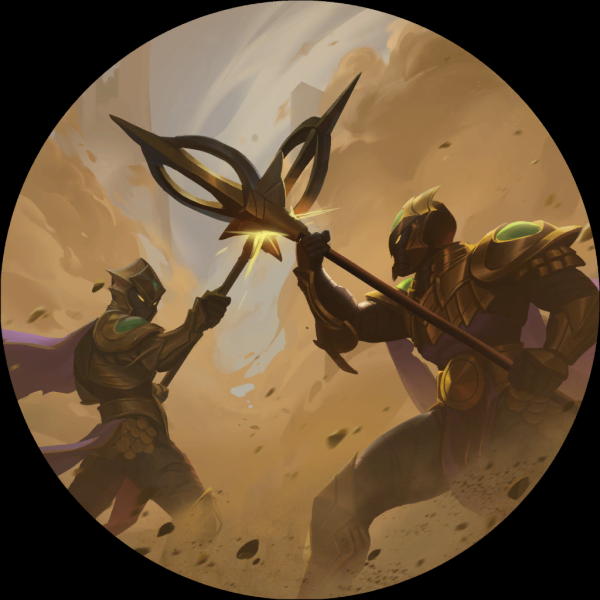 Nope, your eyes aren’t deceiving you, Malphite has made it for the first time to my power rankings, and I’m excited to talk about the deck!

Taliyah Malphite is a landmark-oriented deck that is able to level up both champions with the same gameplan – play landmarks! The deck isn’t new at all, it has existed since Malphite’s release but never really performed well on the competitive ladder. Now with Malphite’s recent buff which allows him to stun a unit on play, he’s much more useful in different scenarios even when not leveled-up, and you’re not simply playing a rock for 7-mana that does nothing.

The archetype looks to set up a wide board of units, level-up both champions, and stun the opponent’s board with Malphite’s Unstoppable Force.

What’s amazing about Taliyah Malphite is its ability to beat both popular decks in the meta right now, Caitlyn Ezreal and Trundle Trydamere while holding an evenish match up against Mono Shurima.

The fact that you’re able to dominate the board with units and set up a board stun with Malphite makes it difficult for most decks to find reliable answers to hold your play, not to mention that you’re able to shut down their win conditions such as Feel The Rush or Tri-beam Improbulator with Rite of Negation.

The deck does struggle with aggressive decks like Pirates, Scouts, and Draven Sion so if your ladder experience is lacking those midrange or control slow decks it’s probably best to switch off Taliyah Malphite.

Caitlyn Ezreal is still one of the top meta decks so far! The play/cast rule change even made the deck better allowing Ezreal to turn into a more threatening burn champion.

Being on top of the meta does have its downside, many players will choose to hard counter you with decks like Trundle Tryndamere or Sentinel control. The archetype does also struggle against Lux Jayce, a deck that is quickly gaining popularity on the competitive ladder.

Ezreal Caitlyn is still a good choice to beat down aggressive decks and Yuumi Pantheon and is still an all-around solid choice for a ladder climb.

I would have rated the archetype higher but the increase of Shadow Isles decks and the emergence of Lux Jayce forced Caitlyn Ezreal to fall off a couple of ranks this week.

Nasus is back and it seems people favor pairing him with Viego instead of his old companion, Thresh.

Viego Nasus and Mono Viego are currently the best performing versions of the archetype, although most likely one will overtake the other as the staple version. With Minimorph completely out of the meta, there’s nothing really standing in both Viego and Nasus’ way.

You’re able to beat down most midrange decks, Caitlyn Ezreal, and aggressive matchups.

The main reason you’d favor mono Viego over the Nasus version is that it gives you a much better match into Trundle Tryndamere, whereas Nasus struggles to get stacks into that deck and will most likely be a dead card or at best underwhelming in your hand.

Alright, I might be a bit biased with this for now but it has been performing well for me in the current meta, 19 wins and 4 defeats overall. Viktor Karma was originally suggested to me by Catasus, the deck tries to counter the meta counters while still holding its own against popular meta archetypes. It wants to beat Shadow Isles decks like Trundle Tryndamere, Trundle Udyr, and Sentinel control.

Moreover, Viktor can turn into a powerful champion the more keywords he gains, and with the many protection tools your deck runs, it’ll be difficult for your opponent to deal with him.

You will struggle against Scouts unless Viktor manages to carry the matchup, especially with a Spirit’s Refuge backup.

The archetype runs landmark destroyer, stuns, and ability to turn your champions into a lethal force with the Overwhelm keyword.

It’s one of the best decks out there for a serious ladder climb if you’re seeing a lot of those decks on your ladder run. Keep in mind you don’t perform well against aggressive matchups such as Pirates as they have the ability to go wide on the board and close out the game before you can set up your win condition.

We are seeing many new faces in this week’s power rankings, Malphite, Nasus, Karma, and Viego are all showing good signs in the current meta.

Important to note, Mono Shurima is still performing well on the ladder, it was difficult to fit it in the top 8 but the archetype wasn’t affected too much with the nerf, you’re ascended champions are delayed for a turn or 2 at most.

On the other hand, Udyr didn’t make it this week, although many different versions are being run on the competitive ladder. Most of those lists aren’t performing well enough to make it to this week’s top 8 list.

Nonetheless, I still have hope that Udyr can exist in a tier 1 deck he simply hasn’t found a home where he can shine, but overall I think as a champion he’s now strong enough to fit in the competitive consistent deck in the future.

This is it for this week’s power rankings, I’ll see you in the next one!