Illaoi, the Kraken Priestess has finally blessed us with her arrival to Legends of Runeterra! Bringing in a new kit to the game with the upcoming Worldwalker set on May 25th, 2022, the most notable one is the new keyword Spawn that summons a Tentacle on the board.

Let’s take a look at all the recent cards that were revealed alongside Illaoi, I’ll rate each one of them and explain my thoughts and expectations!

Illaoi is the newest addition to the Bilgewater champion roster, her gameplay and strength revolve around the Spawn keyword that allows you to summon 1|1 Tentacle on the board.

Although the 4 mana champion has only 1 Power, the 6 Health makes it difficult to kill her. She’s not really problematic on the board until she goes on the attack, she’ll then turn into a frightening threat! Illaoi gains Power stats equal to the strongest Tentacle power on the board. Combined with the Overwhelm keyword she has, she’ll start smacking the Nexus becoming a win condition if not answered.

With the assistance of the Tentacles, Illaoi’s level-up condition doesn’t seem too difficult to fulfill. So with at least two good swings, you’ll be able to have her leveled up.

Once she’s leveled you’re basically not killing Illaoi with sheer unit combat anymore! She adds the value of each spawn by 1, basically synergizing well with any card that can Spawn. At the same time, when she attacks Illaoi is no longer gaining only Power stats but also Health as well equal to that of the Tentacle!

Overall I think Illaoi is a solid champion, her high health allows her to swing almost safely. The problem with the Bilgewater region is that it lacks any protection tools, so we might be seeing the second region in the deck that adds protection cards to ensure the safety and level-up of Illaoi.

Tentacle Smash is Illaoi’s champion spell and it’s definitely a strong one! It provides a removal tool to kill off pesky targets or units that advance your opponent’s game plan, additionally, it will spawn a 3/3 Tentacle if you don’t have one, or buff an existing one by +3|+3! 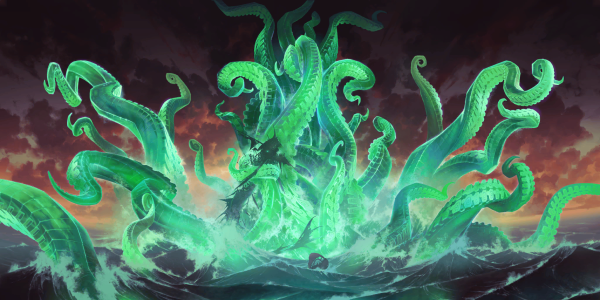 Alright, I was roaming Twitter and saw Cephalopod theory-crafting a couple of Illaoi decks and one of his creations was a Soraka Illaoi deck!

We don’t see Soraka paired much with other champions other than Tahm Kench so I had to feature this list today!

Soraka Illaoi has not one, not two, but three different win conditions in the deck!

The first one is obviously Illaoi, the second is Nagakabouros with its insane ability once its condition is fulfilled, and finally, if you’re unable to win the game the old-fashioned way, Star Spring is here to save the day!

Soraka wants to support Illaoi and the Tentacle, healing them up and making sure they survive the combat phase. Targon also offers protection tools like Sunblessed Vigor, Guiding Touch, and Astral Protection to help make sure Illaoi is safe.

Your main goal is to level-up Illaoi and set up a strong attack to close out the game, The Sea’s Voice will assist in turning your Tentacle into a win condition.

Most likely will be included in Illaoi decks, the card helps you Spawn more Tentacle that’ll later assist in leveling up Illaoi.

The cool thing about Answered Prayer is that it fits in as an early or late-game play.

It goes without saying that this card will most likely only be included in Spawn decks as it’s not really useful outside of archetypes that don’t benefit from the Tentacles.

I can see Buhru Leader being run in so many different archetypes especially the meme-ish type of decks!

For the Tentacles specifically, the additional attack with your Tentacle will accelerate the level-up of your Illaoi without the need for Rally cards.

As for archetypes outside of the Spawn keyword, this might have a cute interaction with Teemo for example, allowing the tiny Yordle to go for another swing! It can also allow Fizz to go for a second swing and if he’s buffed up he’ll be a force to be reckoned with.

Overall it’s difficult right now to evaluate which Bhuru Leader will shine outside of the Spwan archetype, as his stats are a bit underwhelming for his Mana cost. But I have been seeing some players theory-crafting attach decks that use Bhuru Leader to their advantage.

One of the best cards in the Spawn package, the 3 mana 3|3 has alright stats for its mana cost but what really makes the card shine is the Overwhelm keyword it gives to the strongest Tentacle on the board!

Remember this is only for one round but can set up for a lethal attack later on in the game especially if you have Nagakaborous’ Tantrum ready as a follow-up.

It does though feel awkward to play, as you likely want to hold onto this card as long as possible until your Tentacle has gained enough stats to benefit from the Overwhelm keyword, so in most cases, you will not play The Sea’s Voice on turn 3.

The Sea’s Voice is an essential card in an Illaoi deck if you’re looking to use the high stats of your Tentacle to your advantage.

Watchful Idol is a cheap unit to have on the board early on in the game, the card is just there to exist as it cannot really block. Its main purpose is to accelerate the the power of your Tentacle.

The fact that the card is pretty cheap makes it easy to play without losing on the board to your opponent. Healing cards like Guiding Touch or Astral Protection for example can get more value out of the card!

A 5 mana unit with the main purpose of empowering your Spawn. The Spawn 3 is a huge summon effect! The problem with Buhru Lookout is the low stats it has for its price, regardless it can see play in an Illaoi deck as its summon effect is still solid and compensates for the low stats.

A late-game card with high health! It’s similar to Invasive Hydravine in Viego deck. Its main goal is to add pressure with your Tentacle and make sure you can recover in case you lose it later on in the game.

Once you hit 12+ power on your strongest Tentacle, Nagakabouros becomes an alternate win condition! Nagakabouros’ Tantrum will be problematic for your opponent to deal with if you can set up an Overwhelm or Elusive keyword on your Nagakabouros’ Tentacle.

It’s an important addition to an Illaoi deck as it provides a secondary win condition in case Illaoi fails to end the game on her own.

It is an expensive card to play and requires a condition to be met for its full potential to unlock, which means you might fail to do so in some scenarios.

An important inclusion into a Spawn-oriented deck! Although the mana cost is a bit expensive for the usual draw 2 cards when compared to other cards in the game with a similar effect like Whispered Words, Hidden Pathways, and Deep Meditation.

The Spawn 2 though compensates for the additional mana you’re paying! Especially that it’s a burst speed spell, so you could catch your opponent off guard and set up for a strong attack with your Tentacle and Illaoi.

My first impression of Illaoi is that she seems really powerful, the Overwhelm keyword fits her perfectly, and allows her to take advantage of the additional stats she’ll gain from the Tentacle.

Her whole package also seems solid, if anything I think the archetype could be problematic early to mid-game if it draws well. It can high roll a matchup where most decks won’t be able to stop Illaoi’s domination.

The whole archetype does feel a bit like Lurk decks, where most of it is sorta pre-built (Rek’Sai and Pyke), but it’ll be interesting to see what second champion players will pair Illaoi with or even if they decide to run her alone in a deck.