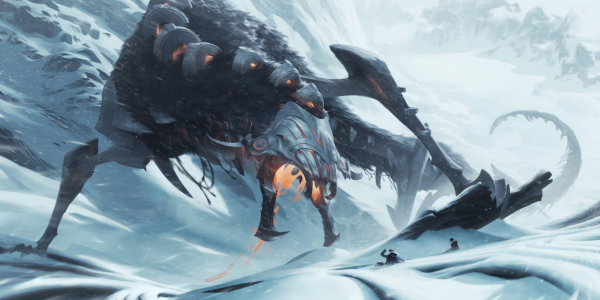 Hi everyone, den at the desk, with the new guide on one of the most talked-about decks of Patch 2.18: Dragons.

Considering how many buffs its cards received, we can say that Dragons have become a good deck – but still a bit disappointing at the same time. And the raw number of different lists for the archetype should be a testimony that players still are experimenting to find the best Dragons decklist out there.

Obviously, the deck is now much better than it was before receiving all this help, and the impact Dragon’s Clutch can have on the game now is a huge factor. The simple fact that Dragons can now threaten to lethal more often and use what they are best at – their board -to do so, gives the deck a different look and makes it feel much more frightening.

But there still is ‘a lack of satisfaction’ feeling about Dragons, as the deck still has to reach the highest tiers of the metagame and prove itself at the top of the ladder.

So far, I have seen at least 4 different takes on how to build Dragons, all of them pairing with either Zoe or Shyvana and looking for a strong curve culminating on the well-known synergy of Eclipse Dragon into Aurelion Sol on turn 8.

The main problem I have with this orientation for Dragons is the fact that matches rarely go to late-game scenarios where we can safely develop big Dragons to close out the game.

Instead, the midgame is much more important, and Dragons often find themselves adopting a defensive role against most of the current metagame. The impact of big dragons is therefore very marginal compared to what it could be if the metagame was focused around slower, more value-oriented decks.

That’s the reason why, for the current metagame, I decided to go for a much more tempo-oriented deck that can close the game faster if it gets through the opposing pressure phase. Thanks to Shyvana and Zoe, we also have more tools to fight efficiently during that most important phase of the game.

Against slower decks, where we could miss the great late-game Eclipse Dragon and Aurelion Sol provides, we are instead looking to abuse the Fused Firebrand as our main pressure tool. Golden Aegis is another game-ender once we manage to establish some solid board presence with our midrange threats.

Because I imagine most people expected an Aurelion Sol list and might wish to play that kind of deck, the list from Pixer during last week’s Fight Night is a good choice: Click here to open the decklist.

Dragons builds can go in different directions and adapt to various specific metas – to the point that it can actually become quite challenging to find the perfect 40 cards decklist. Below is a list of cards that can help you steer your deck in one direction or another depending on what you wish to accomplish.

Whether it is to defend yourself, to pressure the opponent, or even to create a distraction, Dragons operate almost exclusively on the board. They are really good at it, and with Demacia’s combat tricks and the beefy stats, our Dagons will keep growing throughout the game.

Force your opponent to come and play on the board with you and keep your important Dragons alive and well. Guiding Touch is a great example of a card that we look to use on our units more than our Nexus whenever possible.

Dragons are amongst the biggest units in the game, and there aren’t many decks that can take them on. Our spells also work well towards that goal, as Single Combat, Strafing Strike, and Concerted Strike all serve as single-target removal.

In that context, our biggest weakness is to fast wide boards as this transitions quickly into Nexus damage and forces us into a race. Even if it might feel bad early on in the game to sacrifice cards we would like to save for synergies later on (like Ruined Dragonguard), it is important to not let the opposing board go wide, otherwise, our 4- and 5-drops won’t be as efficient as they could be.

This might look like weird advice – of course, we always look for the best play, with any deck. What I mean by this is that oftentimes with this deck, the best play is obvious, and it’s mostly a matter of sequencing it properly.

As said before, Dragons aren’t very flexible in the way they approach the game, they want to set up beefy units to dominate the board and impose their will through efficient trading and evergrowing threats. In a lot of cases, keeping that simple approach in mind will serve you well, as taking complicated lines of play can be pretty punishing with a deck that isn’t filled with various options.

When growing our board and being in a dominant position, especially with large units like Dragons, it is easy to get carried away and believe nothing bad can happen to us anymore.

While the deck is one of the best when it is in control of the board, our healing is limited to only 5 cards in our deck, meaning a deck with direct damage could race us and a control deck could find a way to come back onto the board given enough time. Once you feel you are safe and can develop your board, transform that development into damage, denying any comeback possibility your opponent might have.

Mulligan for: Fused Firebrand – Shyvana – Dragon Chow – other Curve-fillers if you have some of the mentioned cards already.

Mulligan for: Zoe – Dragonguard Lieutenant – Brightsteel Protector if you play it. Solari Sunforger – Sharpsight – Single Combat, if you have some of the previously mentioned cards already.

Mulligan for: Zoe. If you do not have Zoe, throw away your entire hand. If you have her, look for curve and disruption of the opponent’s early game, Dragonguard Lieutenant and Brightsteel Protector or Loping Telescope mostly.

Dragons isn’t a bad deck, especially after all the help it received in Patch 2.18.

The problem is the fact that its gameplan is still too linear and dependant on what the rest of the metagame looks like. The popularity spike the deck had in the early days after the patch quickly got matched by Lurkers and limited its potential growth. Since then, Dragons were relegated to a tournament deck, which is capable of shining when protected with a ban.

Whether you believe the tempo or the value approach is better is entirely up to what you want the deck to accomplish. I personally believe this tempo build is more suited to the current metagame, which rewards early and midgame pressure rather than late-game value.

Also, in order to make the deck more flexible, being the one pressuring the opponent opens up different lines of play, while more defensive approach usually relies on finding the right card at the right time.

As it is now customary, I invite you to join the RuneterraCCG community on Discord or join us on Twitter. As for myself, you can find me on Twitter here or coaching on Metafy.