This week we’ve finally got a balance update and boy, was it a pleasant surprise. Multiple nerfs to the top archetypes were included and on top of it, some of the more underplayed cards received buffs to help them get back into viability.

I have been playing a lot – as well as discussing and spectating other games – to see what these changes have actually brought and this article is meant to be a matter-of-fact showcase of lists that seem to be boosted by the patch.

There are 5 decks that I included in this piece. I tried to make sure that some of the archetypes have been buffed directly; as in they feature cards that have been made stronger in the patch. Few of the lists, however, have gotten more powerful indirectly – because of the nerfs to decks that countered them, or buffs to those which they beat.

These are not necessarily the five strongest decks of the patch – for that, look out for our Meta Tier List updates as we learn more about the state of the patch. Instead, the lists in the article are the ones whose relative power level grew the most, at least in my humble opinion.

Without too long of an introduction, here is the list of 5 decks that became better after the latest patch! 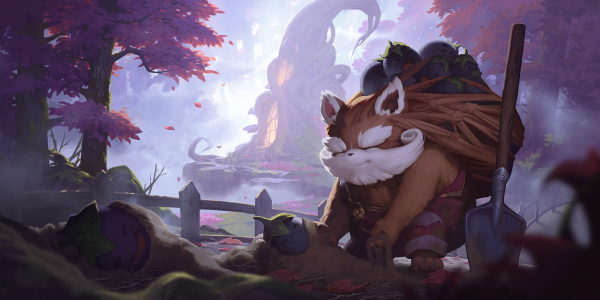 Multiple people have tried Lulu with Shen, as Shen’s best deck has become weaker with Fiora changes, and Lulu received a small buff. The exact list I’m featuring is from Bratchedkata, but there are many ways to build this deck and I encourage you to try your own spins!

This is a very aggressive deck that is, in a way, similar to Scouts in its playstyle. It has multiple cheap units that have snowball potential like Greenglade Caretaker and Flower Child and supports those with War Chefs, Young Witch, as well as the champions of the deck. These cards allow you to create a powerful board, that can force awkward blocks from the opponent and then strike again with a well-timed Rally (there are a total of five Rally effects in the list).

There are multiple reasons why this deck is working better now than it did previously. The first and most obvious one is that Lulu has gotten a straightforward buff to her attack, meaning she can go into the combat zone without always trading down into other 3-drops.

Another one is that with Fiora nerf, there is room for other ways to use the power of Shen combined with Demacia. Finally, the meta has shifted in a way that allows Rally strategies to flourish, as Lee Sin and Matron Watcher decks are both quite weak to decks that can attack them multiple times in a round.

I mentioned what are the strong sides of Lulu Shen, but there are also weaknesses. Fast aggro decks that include over-the-top burn in their lists will push enough damage early on, or will just force bad blocks from you, which will mean your attacks will not be fast enough to race them.

All in all, this strategy is not completely new and plays out a lot like other aggressive Demacia decks. But it is working great and Lulu seems to finally have found a deck that is hovering on the edge of viability. I definitely recommend this to all Lulu fans, who so far had to resort to playing Lulu Jinx.

Nightfall seems to stay in the same category during most patches – a strong deck that is quite difficult to pick up, which not many players actually take the time to master. Meta changes and the Gifts From Beyond adjustment causes Nightfall to become a much better contender now.

This very well-known deck tends to be misunderstood by players, as it is not a typical aggro deck. Instead, it aims to set up crucial swing turns in the early-to-mid game.

It is deceptively versatile, as it can do insanely high amounts of damage in the early game with The Flights and Stygian Onlookers, but can also pull off powerful Fearsome turns in the later stages with Diana and Nocturne. On top of that, in aggressive matchups, it can play the role of a control deck, using Diana and Unspeakable Horrors for removal and Doombeasts combined with Unto Dusks for healing.

The change to Gifts From Beyond positions the card as a perfect fit for Nightfall. At 1 mana, it bails you out of turns without a good Nightfall activator, while also providing great versatility, giving access to Overwhelm damage, healing from and the utility of the other 3 weapons.

Additionally, the meta has shifted in such a way, that the only really difficult matchups for the deck are Matron Watcher and Discard Aggro. All other matchups against aggro decks, as well as Lee Sin, are winnable and make Nightfall a good ladder choice if you are willing to learn the deck.

I can whole-heartedly recommend this deck to anyone willing to put some time in to truly master it. It is difficult and requires some mindset change from your usual aggro playstyle, but it feels really rewarding to play and allows for an unusual amount of skill expression and agency for a deck this fast.

While Noxus Burn decks were happy to often face off against Fizz TF in the previous meta, the overwhelming amount of Aphelios + Temple decks was far from ideal. With the change to Legion Rearguard and the meta shift, there are multiple burn archetypes at the top of the meta stats now when it comes to win rate.

I’m featuring a more off-beat list that includes Azir, and Ruinous Path as additions to the standard burn package of Noxus.

As with all decks of this type, the idea is to get in as much damage as possible in the early stages of the game. You are swarming the board with multiple fragile units like the aforementioned Dunekeeper, House Spider, and such. Azir helps with going wide in the early midgame, while Ruin Runner coming down on turn 5 or 6 is probably one of the last ways to get damage in through the board. The deck is topped off with burn cards like Decimate, Noxian Fervor, Ruinous Path, as well as Imperial Demolitionist, to ensure that there is enough damage to finish off the opponent.

It is hard to judge whether the Legion Rearguard buff had a bigger impact on the deck’s strength, or was more of a shift in the metagame, but all kinds of Noxus burn strongly benefit from the current state of the game. This entry could just as well include, instead of Azir, a version with Teemo in PnZ, Spiders in SI, or Pirates in Bilgewater. All these decks are on the rise and capable of climbing to the highest ranks on the ladder.

If you want to climb quickly, playing Noxus burn is a fantastic way to get in quick games, with a rather easy-to-learn playstyle!

This is another one of those misunderstood archetypes, just as Nightfall. While easier to piot than Diana Nocturne, it also does not play like a regular aggressive list, looking for strong combo turns in the early midgame instead. This exact list comes from MreMOEtional, a top aggro player in LoR.

Lucian Azir is full of cards that, on their own, do not hold big power, but rather require synergies to be fully unlocked. That is exactly what the list provides, aiming to level both champions quickly while setting up Emperor’s Dais.

The strongest turns of this deck come from leveling Lucian and causing his Rally effect to proc thanks to Sand Soldiers. On top of that, the deck packs a fair amount of top-end, going wide with high attack tokens thanks to Inspiring Marshal, or giving the wide board Fearsome with Cithria the Bold. The swarmy nature of the deck can also be taken advantage of by using Relentless Pursuit and Cataclysm.

This deck’s increase in power can clearly be explained by Lee Sin and Matron’s rise, which is also the reason why Lulu Shen suddenly became a good deck. Lucian Azir can steal games against decks it is not technically strong against – few can beat the most high-roll openings of this strategy. The deck’s biggest weakness is faster strategies, as well as Ashe Sej – but we can tech with cards like Remembrance or Radiant Guardian.

I can strongly recommend trying out this deck, especially if you’re seeing lots of Lee and Matron whenever you are playing. It is extremely satisfying to pull off a Turn 3-4 Lucian level into lethal and it happens surprisingly often.

TK Soraka has not been directly buffed, but the meta shift arguably helps it even more than in the case with Lucian Azir.

This list relies on the Star Spring win condition in most matchups, but there is an alternative way to achieve victory through the board, especially with high attack Star Shepherds combined with Shakedown. The deck is very well-known, I will skip the brief explanation of how it works. You can check out our TK Soraka guide here.

The main reason for TK Soraka’s rise in power is the fact that both Lee Sin and Matron, but also their counters, lose to this deck.

Demacia, being a board-based deck, struggles to beat TK Soraka that actually wants the opponent to attack into them. With TF Fizz, one of the TK Soraka’s counters, out of the way, as well as Targon being much less prevalent, bad matchups are few and far between. On top of that, the lessened popularity of The Veiled Temple after its nerf means less landmark removal is out there, which is another win for the Star Spring-centered list.

This one is tricky, as it is a very peculiar deck; you either love playing it, or hate doing so. I recommend trying it out and you will quickly decide whether it is something for you or not; one way or another, it is a powerful contender in the meta.

The patch changed a lot, destroying the trinity that was previously ruling the meta – Fizz TF, Aphelios, and Fiora Shen. Most of the decks mentioned above benefit from those nerfs much more than they do directly from buffs to cards included in their respective lists.

It seems that the meta was shaken up instantly and we are in for a few weeks where we’ll be slowly figuting out what works and what doesn’t. Hopefully, we all find our strong picks before seasonal! The archetypes featured in this article are only an observation of the first few days; I have no doubt that as the meta shapes up, some of them might fall off or rise even further to become Tier 1 decks.

That said, I hope you enjoy playing the lists I included and maybe find your new favourite meta list among them!